We need surprisingly few numerical methods to be able to compute the CMB power-spectrum. A good ODE solver and a way of interpolating functions of one and two variables is basically all we need and we will briefly talk about the theory behind these below. The only special (non-standard) function we need is the spherical Bessel function. This is provided in the standard library of some programming languages like modern C++ and Python, but if its not provided in the language you use we have some notes on how you can compute it yourself if you cannot find a good library for this.

Having choosen the method we need to select the time-step. This is often best done adaptively, i.e. we pick the time-step after each step such that the error in the solution will be below some user-defined tolerance allowing us to pick larger time-steps when little is happening and small time-steps when the solution changes fast. For example for the GSL ODE solver we use you can specify a tolerance for the absolute and relative error. The smaller the values the better, but its also slower. The best values are typically best found by experimenting. For more info take a look at the GSL documentation.

The methods above are just the simplest ones. For cases where the equation system is stiff then we often end up with having to pick a very small time-step to guarantee the accuracy of the solution and it becomes super slow. For these cases there are much better methods however they often require us to provide $\frac{\partial\vec{f}}{\partial t}$ and the Jacobian $J_{ij} = \frac{\partial\vec{f}_i}{\partial y_j}$ as additional inputs. If you have $20$ equations this requires you to set a $20\times 20$ matrix so can get messy and is much more work to implement, but can significantly speed up the integration. The state of the art CMB codes today often have specialized integrators to make it as efficient as possible (plus they also rely on different approximation schemes for the equations themselves to help speed it up). Anyway I just wanted to mention this and its not something I would reccomend spending time on unless you really want to try it out.

Note that many of the integrals we encounter in this course like can be rewritten as ODEs (e.g. $f(x) = \int_0^x g(x')dx'$ becomes $f'(x) = g(x)$ with $f(0) = 0$) and solved with our ODE solver. In fact we can also solve improper integrals this way, e.g. for $I = \int_0^\infty g(x)dx$ we can define $f(x) = \int_0^x g(x)dx$ and integrate $f'(x) = g(x)$ with $f(0) = 0$ from $x=0$ till some large value of $x$ (ensuring that it has converged) and take this as the value of the improper integral. Note that there are better (faster / more accurate) methods for evaluating integrals than this, but this is a quick and dirty way of doing it that often gives good results. (Though for some of the oscillatory integrals we will encounter in the end of this course its better to just to the integration directly).

For functions where you only have the result on a discrete set of points (like the result of an ODE solver) then we need a method to interpolate the function to any other value. The way we are going to deal with this is to make a so-called cubic spline. This is the spline equivalent of what RK4 is for ODEs - a good compromise between accuracy and speed. It has the property that it gives exact results for any polynomial of degree $3$ or lower and since most of the functions we will spline and nice smooth functions this will give us good results.

Given data $(x_i, y_i)_{i=1}^n$ we want to approximate this with a qubic polynomial on each interval $[x_i,x_{i+1})$, i.e. we want to find a set of coefficients $(a_i,b_i,c_i,d_i)_{i=1^{n-1}}$ such that $$S_i(x) = a_i + b_i(x-x_i) + c_i(x-x_i)^2 + d_i(x-x_i)^3$$ has the property that $S_i(x_i) = y_i$ and the neighboring polynomials $S_i$ and $S_{i+1}$ have a matching function value and first two derivatives at $x=x_{i+1}$. This ensures that the function we get is two times differentiable. This is always possible to do (see link above for a concrete algorithm). We have a free choice of boundary conditions (values for $y'$ at the endpoints) that must be specified in addition to this. The "standard" choice for doing this is to select the so-called natural spline where the boundary conditions are chosen such that we have $y'' = 0$ at the end-points. The advantage of this is that we don't have to supply the boundary conditions (which we might not know) and the disadvantage is that it will be inaccurate close to the boundaries if the function we spline do not satisfy $y'' = 0$. This is often not a big issue in practice, but useful to be aware of this. If you have issues close to the boundaries then one can just extend the range you spline over or use more points when making the spline (only a real issue for $x$ values close to the first or last bin). Another advantage of making a cubic spline is that once we have made it, we can use it to look up not just the function value but its first two derivatives at any point. This will be very useful for us as we often will have to compute derivatives of the functions we will spline.

Having made a spline, how does it work to do a lookup? After making it what we effectively have is arrays with the coefficients $a_i,b_i,c_i,d_i$ above and we can then compute the function value by evaluating $S_i(x)$ as given above. This only costs a few artihmetic operations so its very fast. But to do so we need to first find the interval $[x_i,x_{i+1})$ that contains the $x$ we want to compute and this is usualy what takes time. This is often done using binary search on the $x_i$-array. Also to make lookups faster what one typically do is to cache (save) the last interval one did a lookup on and if the next $x$-value happens to be in the same interval one can avoid the binary search. It is therefore often faster to evaluate a spline in a ordered fashion rather than doing random lookups. 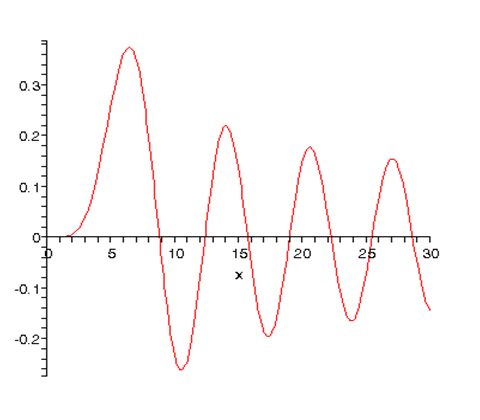 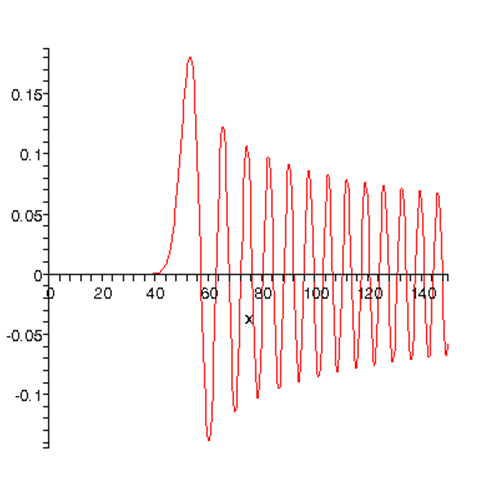 The ODE above can be used to solve for it, however as $x=0$ is a singular point we must start the integration at some finite $x$ and use the asymptotical formula to set the initial condition. This finite value must be large enough to avoid numerical issues (the initial value cannot be too small compared to machine precision).

Some languages have this function built-in. For example in C++ (17 or larger) you can compute this by calling std::sph_bessel(ell, x). This implementation breaks down for $x \gtrsim 14000$. The GSL library can also be used for this by calling gsl_sf_bessel_jl(ell, x). For $x \gtrsim 9000$ this implementation also breaks down. It might also have some issues for small arguments and large $\ell$ (for which the function is extremely close to zero - but this is easy to fix as we just need to put the value to $0$ here). In Python there is an implementation of this in scipy.special.spherical_jn. In C you can probably "steal" the implementation in CLASS and in Fortran you can probably "steal" the implementation in CAMB (though we also have an implementation of this in the Fortan template of the numerical project). For all of these implementations remember that $j_\ell(0)$ is undefined so its a good idea to test for this and return $1$ if $\ell=0$ and $0$ otherwise

If we want to study cosmological models with non-zero curvature then things are a bit more complicated. Instead of getting spherical bessel function in the line of sight integrals we get a more general class of functions called Ultra / Hyper Spherical Bessel Functions. The CMB literature has several papers on how to compute these efficiently ([1], [2], [3]), but I won't go into detail about it here as this is beyond the scope of this course.

There are several codes availiable online that computes the recombination history and does this in much greater detail than we do. First we have Recfast++. This is the same code that is (most commonly) used within Einstein-Boltzmann solvers like CAMB and CLASS. Then there is also CosmoRec and HyRec. If you want a more accurate recombination analysis (that takes many excited states into account which again has a $\%$-level effect on $X_e,T_b$) then you can use these codes and feed that as input to your code (or better: call these routins from within your code. This is very easy to do with Recfast++. I'm not that familiar with the others to know how easy that would be). These codes also provides a good way of checking how accurate our simplified treatment really is.

If we want to compare the result of $C_\ell$ with another Einstein-Boltzmann solver (and you want to check accuracy at the $\%$-level) then its a good idea to make sure that the recombination history is exactly the same in both codes to more clearly see what the differences (coming from how you solve the equations, accuracy settings, approximations you use etc.) are.

There are several high-quality codes to compute the CMB and matter power-spectra, just as we are doing in this course, availiable online. These are the codes that you want to use for actual science. For us these codes are a good way of checking that the results you get are correct. The two main ones are CAMB (Fortran) and CLASS (C).

NASA has also made a very useful online tool that you can use to compute the CMB and matter power-spectra using CAMB directy in your browser (just set the parameters on a website and press play), see CAMB Web Interface.

You can find this implemented in my Cosmology C++ library (GitHub).

From the theoretical $C_\ell$ power-spectrum we can generate a CMB map. Generating a map is a fairly straight forward thing to do, but the hard part of this is to pixelate the sphere and project that down to a 2D map that we can plot. Luckily there is a great library for this namely the HEALPIX library (for this you also need the CFITSIO library). There is also a Python wrapper for this library called Healpy. You can supply that library with the $C_\ell$'s or a realization of the $a_{\ell m}$'s (which you can generate from the $C_\ell$'s) and have it provide you the map.

If you want to plot the CMB map (high resolution) as measured by Planck then you can download a FITS file with the data (2 GB), the Planck color palette here and then run the Python script that can be found here. This will give you a 170MB image.

A list of some useful cosmology codes for doing various things: