This document contains some selected problems from the stuff we have gone through in the lectures. Most of the problems are there for you to see if you are able to perform the derivations we have gone through in the lectures (and understand the physics of it) so they might not be that exciting. For more problems see the end of each section in Dodelson or in Baumann's lecture notes. I have added a brief summary of some of the theory needed in this course on this page which might be useful.

If we don't assume flatness then the general form of the line-element in spherical coordinates ($t,r,\theta,\phi$) is given by $$ds^2 = -dt^2 + a^2\left(\frac{dr^2}{1-kr^2} + r^2d\theta^2 + r^2\sin^2\theta d\phi^2\right)$$ where $k$ is a constant describing the geometry of the Universe ($k>0$ spherical, $k=0$ flat and $k<0$ hyperbolic). Derive the Einsteins equation for this metric. You will have to compute all the Christoffel symbols from scratch, then $R_{\mu\nu}$ (you only need $R_{00}$ and $R_{ij}$) and finally $R$ and evaluate the $00$ component of Einsteins equation to get the first Friedmann equation. Evaluate the $ij$ component to get the second Friedman equation. Check that the equations reduce to what we derived in the lectures when $k=0$.

Note that these approximations will not be perfect, but it will give you an indication if you are doing it correctly or not.

Entropy is a useful concept for working with the early Universe. The second law of thermodynamics reads $$dS = \frac{d(\rho V) + PdV}{T}$$ where $V$ is the volume in question, $P$ the pressure and $T$ the temperature. Use the conservation equation $\dot{\rho} + 3H(\rho+P) = 0$ together with $V\propto a^3$ (the volume we consider expands with the Universe) to show that $S$ is a conserved quantity.

The entropy of a relativistic gas is given by $S = \frac{4\rho V}{3T} \propto T^3$ and the total entropy in the early Universe is given by $$S \propto g_{\rm eff}T^3$$ where $g_{\rm eff} = \sum_{\text{Boson-degreees-of-freedom}} + \frac{7}{8} \sum_{\text{Fermion-degreees-of-freedom}}$ is the number of relativistic degrees of freedom (recall the factor of $7/8$ that comes from what we talked about in the lectures - the difference between Fermi-Dirac and Bose-Einstein statistics). Non-relativistic matter carries negligible entropy and can be ignored.

Here are some exericises to see if you are able to do some basic thermodynamical calculation.

Here we are just going to use the intuition we have for the Boltzmann equation to write it down for a different process. Let's assume we have two particle species $1$ and $2$ and they can transform into each other $1 \rightleftharpoons 2$ (if you want you can think of $1$ and $2$ as different flavours of neutrinos and this being a very simple toy model for neutrino oscillations). $1$ can turn into $2$ with rate $\alpha$ and $2$ and turn into $1$ with rate $\beta$. Write down a Boltzmann-like equation (on the same kind of form as in the previous exercise) that describes this toy model. There will be two terms: one representing $1$'s turning into $2$' and one representing $2$'s turning into $1$'s. Remember that the total number of particles stays the same. To simplify the equation let $a^3 n_1 = N_1$ and $a^3 n_2 = N_2$ denote the number of particles of each species in some fixed co-moving volume and rephrase it in terms of $N_1$ and $N_2$.

Solve the Boltzmann equation you put up and show that we always reach the equilibirum within a time of a few $t_*$'s where $t_* = \frac{1}{\alpha+\beta}$. This demonstrates the obvious thing that the higher the rate the quicker equilibrium is reached. However this simple toy model does not have decoupling (and freeze-out) since the particle "interacts" with themselves so lets do a realistic example with dark matter.

In the radiation dominated regime we have $H^2 \propto \rho \propto g_*T^4$ where $g_* = g_*(T)$ is the number of relativistic degrees of freedom at any time. Expressing $H$ in terms of $T$ is quite useful in the radition dominated Universe and we will use this in this problem. Below you will need $\frac{dT}{dt}$ and for this purpose you can just assume $T\propto a^{-1}$ (this holds except for when $g_*$ changes - i.e. in the short time-frame when a species decouple). 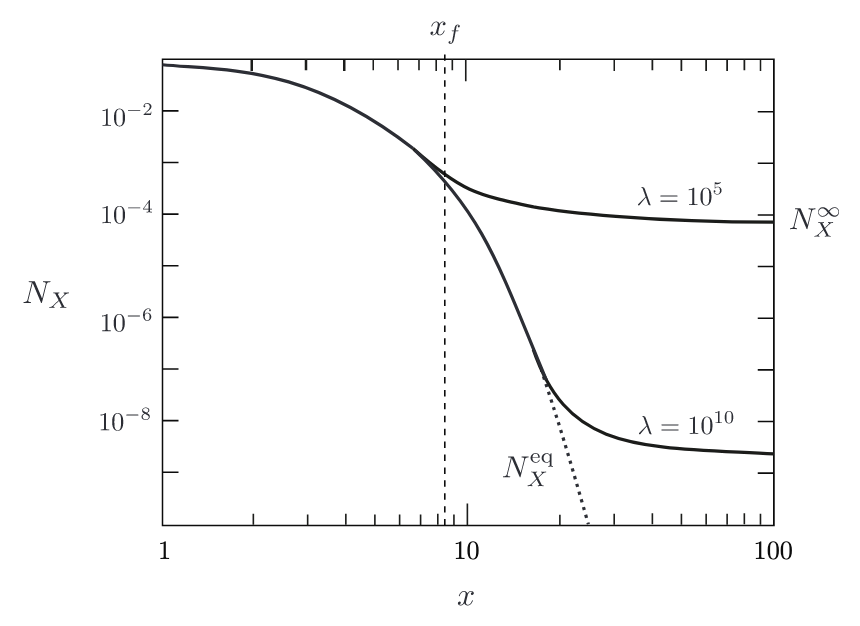 Write down (schematically) the Boltzmann equations for cosmological baryons (for simplicity we assume we only have protons and electrons). What are the relevant interactions that takes place?

To get an equation for how the number density of baryons evolve we take the zeroth moment of the Boltzmann equation (just as for dark matter). Explain why this equation is the same as for cold dark matter (i.e. why none of the interactions contribute to this equation).

The equation for the baryon velocity $v_b$, found from taking the first moment, is (here in Fourier space) $$\frac{\partial v_b}{\partial t} + Hv_b + \frac{ik\Psi}{a} = \frac{\partial\tau}{\partial t} \frac{4\rho_\gamma}{3\rho_b}(3i\Theta_1 + v_b)$$ This has a contribution from Compton scattering, but not from Coulomb scattering. What role does Coulomb scattering play in all of this? Why is the collision term small if the baryon density (i.e. the proton mass) is huge?

For dark matter and baryons we perturbed the number density directly, i.e. $$n = n^{(0)}(1+\delta)$$ The energy density for massive particles is simply $\rho \approx mn$ in the non-relativistic limit where $m$ is the mass of the particles (recall $\rho \sim \int E f$ and for the relevant parts of the integral $E\sim m$ so $\rho \sim m \int f = mn$). Express $T^0_0$ for dark matter and baryons in terms of the background energy density and the perturbation.

Use this to write down $T^0_0$ for the sum of all components we have in our Universe. Split it into a background part and a peturbation part. This component is needed to find an evolution equation for the metric potential $\Phi$ using Einsteins equation (as done in Dodelson). The left hand side of the Einstein equation is $G^0_0 = \overline{G}^0_0 + \delta G^0_0$ where the perturbation (in Fourier space - skipping the hat over the metric potentials - its too much typing) is $$\delta \hat{G}^0_0 = -6H\Phi_{,0} + 6\Psi H^2 - 2\frac{k^2\Phi}{a^2}$$ Use the results above to find an equation for how the metric potientials evolve. Check that this agrees with expectations: if we have a static Universe ($a=1$, $H=0$ and $\Phi_{,0}=0$) then the perturbed metric is nothing but the Newtonian limit of General Relativity (small perturbations about Minkowski space) for which $\Phi$ should just follow the usual Newtonian Poisson equation (but the right hand side will have a negative sign which is just due to how we defined $\Phi,\Psi$).

Assuming that inflation happened roughly at the GUT scale $k_bT \sim 10^{15}$ GeV (where $k_b \sim 10^{-13}$ GeV/K). Use how the temperature of the primordial plasma evolves to estimate the scale-factor $a_E$ after inflation ended.

The Hubble radius is $r = \frac{1}{aH}$. To solve the Horizon problem we require that the whole observable Universe fits into the Hubble sphere before inflation happened, i.e. $$r_I = \frac{1}{a_I H_I} > \frac{1}{H_0} = r_0$$ At the end of inflation $a=a_E$ the Universe is radiation dominated and for simplicity you can assume that the Universe only has radiation (even today). Estimate $\log(a_E / a_I)$, i.e. how many e-folds of inflation do we need to solve the Horizon problem. You can assume that $H_E = H_I$, i.e. that the Hubble factor at the end of inflation is the same as the Hubble factor when inflation started. Notice the symmetry in the result (i.e. in the relation between $a_E/a_I$ to $a_0/a_E$ that you found), explain this based on how $r$ evolves (see figure 2.4 of Baumann for an intuitive picture).

Why is this considered a problem? Turned around: if $\Omega_k(a_E)$ has a "reasonable" value (i.e. not super close to $0$), what would the curvature of the Universe be today?

Compute how $\Omega_k(a)$ evolve during inflation ($H = $ const) and explain how inflation solves the flatness problem. Also give an "intuitive" answer, i.e. without having to rely on the mathematics.

Here we will go through how to set the initial conditions for $\Phi,\Psi$ (from which all the other initial conditions are given in terms off). This is to get the same normalization as used when quoting results from CMB experiments.

Inflation sets up curvature perturbation $\mathcal{R}$ with a power-spectrum $$\left<\mathcal{R}_k(\vec{k})\mathcal{R}_k(\vec{k}')^*\right> = (2\pi)^3\delta(\vec{k}-\vec{k}')P(k)$$ where $P(k) = \frac{2\pi^2}{k^3}\mathcal{P}(k)$ and $\mathcal{P}(k) = A_s(k/k_{\rm pivot})^{n_s-1}$ is the usual expression to see for the initial power-spectrum as is standard in the litterature and used by CMB experiments. The curvature perturbations in the Newtonian gauge is given by (see Baumann, but note he uses a different sign convention for $\Phi$ and some assumptions that is equivalent to assuming no neutrinos) $$\mathcal{R} = \Phi + \frac{\mathcal{H}(\Phi' - \mathcal{H}\Psi)}{4\pi G a^2 (\overline{\rho} + \overline{P})}$$ and can be shown to not evolve when outside the horizon. When solving it numerically we want to set the initial conditions such that $\mathcal{R} = 1$ at the initial time. That way, we only have to multiply $|\Theta_\ell|^2$ by $\mathcal{P}(k)$ when computing the $C_\ell$'s. Compute what the initial conditions for $\Phi$ and $\Psi$ should be. If your code does not include neutrinos then you can ignoring them here (however neutrinos does change the result). Here are some pointers:

Show using the Einstein equation for $\Phi$ to find the solution on super-horizon scales. Conclude that $\Phi$ is also frozen when outside the horizon.

The Einstein equation relating $\Phi$ and $\Psi$ is $$\Phi+\Psi = -\frac{12H_0^2}{k^2a^2}(\Omega_R \Theta_2 + \Omega_\nu \mathcal{N}_2)$$ See Dodelson Exercise 2 in Chapter 6 for how to compute the neutrino quadrupole initial condition if you are including neutrinos. Use this to relate $\Phi$ and $\Psi$. The photon quadrupole is practically zero early on, why? (See the Boltzmann equation for photons).