Back to the main page 1. Overview: Milestone IV 2. Theoretical background 3. What you have to do 4. Testing your code 5. Appendix

Finally. After spending a lot of time on understanding the evolution of the background properties of the universe, its ionization history, and the growth of structure in the early universe, we are now ready to pull it all together, and compute the CMB power spectrum!

The deliverables for this project are the following:

A short introduction to the milestone can be found in this PDF (keynote).

The CMB power spectrum, on the other hand, is simply defined as the expectation value of the square of the spherical harmonics coefficients, $$C_\ell \equiv \left\lt |a_{\ell m}|^2 \right\gt = \left\lt a_{\ell m}a_{\ell m}^* \right\gt.$$ Note that, in principle, this function should have two subscripts, $C_{\ell m}$, but because we assume that the universe is isotropic, it must have the same power spectrum towards both the $x$, $y$ and $z$ directions, and this implies full rotational invariance. As a result, there is no $m$ dependence in the power spectrum, and we simply average over $m$, and only call the spectrum $C_\ell$.

So, in order to get to the power spectrum, we need to know the temperature field we observe around us today, $T(\hat{n}, x=0)$. But fortunately, we already have this information (more or less), as we have already computed the evolution of the temperature field in the form of $\Theta_\ell(k,x)$. So all we have to do, is to read off the values of these functions at $x=0$, Fourier transform the resulting coefficients (to get $T(\vec{n})$ instead of $T(\vec{k})$), and read off the correct values.

But, you object, we only computed these functions up to $\ell = 6$, and we are surely interested in smaller scales than that!. And you are completely right: we want to know the power spectrum to at least $\ell = 1200$. So what you have to then, is to rerun the code, but this time with $\ell_{\rm max}=1200$ instead of $6$, and proceed. The only problem with that is that it will take a very long time to complete.

So, the intuition behind this approach is that the CMB radiation we observe in a given direction on the sky, is basically the integral of the local CMB monopole (weighted by the visibility function) along the line of sight from us to infinity. That's the first $\Theta_0$ term in the source function. However, there are a number of corrections to this effect. First, the $\Psi$ term encodes the fact that the photons have to climb out of a graviational potential, and therefore loose energy on its way to us. $\Pi$ is a small quadrupolar (+ polarization) correction to the original monopole contribution.

The next main term is essentially the so-called Integrated Sachs-Wolfe contribution, which describes the fact that graviational potentials actually change while the photons are moving. The third term is a Doppler term.

So, this is a much more beautiful approach: Instead of evaluating what every single photon moment is at our position today, we can compute the monopole at all positions and times, and then do the integral through space. Much faster, and also quite intuitive.

Implement a class/module (PowerSpectrum.h if you use the C++ template) that takes in a BackgroundCosmology, RecombinationHistory and a Perturbations object - the ones you created in the previous three milestones - and use this to compute $\Theta_\ell(k,x=0)$ for $2 <\ell < 1200$ using line-of-sight integration and integrate this again to obtain the power-spectrum.

You will have to go back to what you did in milestone III and add a few more lines of code to make sure you compute and store the source-function defined above. This is what we need to do the line-of-sight integration. You will also need Bessel-functions (the function j_ell(ell, x) defined in Utils.h). If you haven't installed the ComplexBessel library you should probably do this (see the GitHub page for how to do this). The fallback if you don't have this is to use the GSL one and I found it to be quite buggy for large $\ell$. 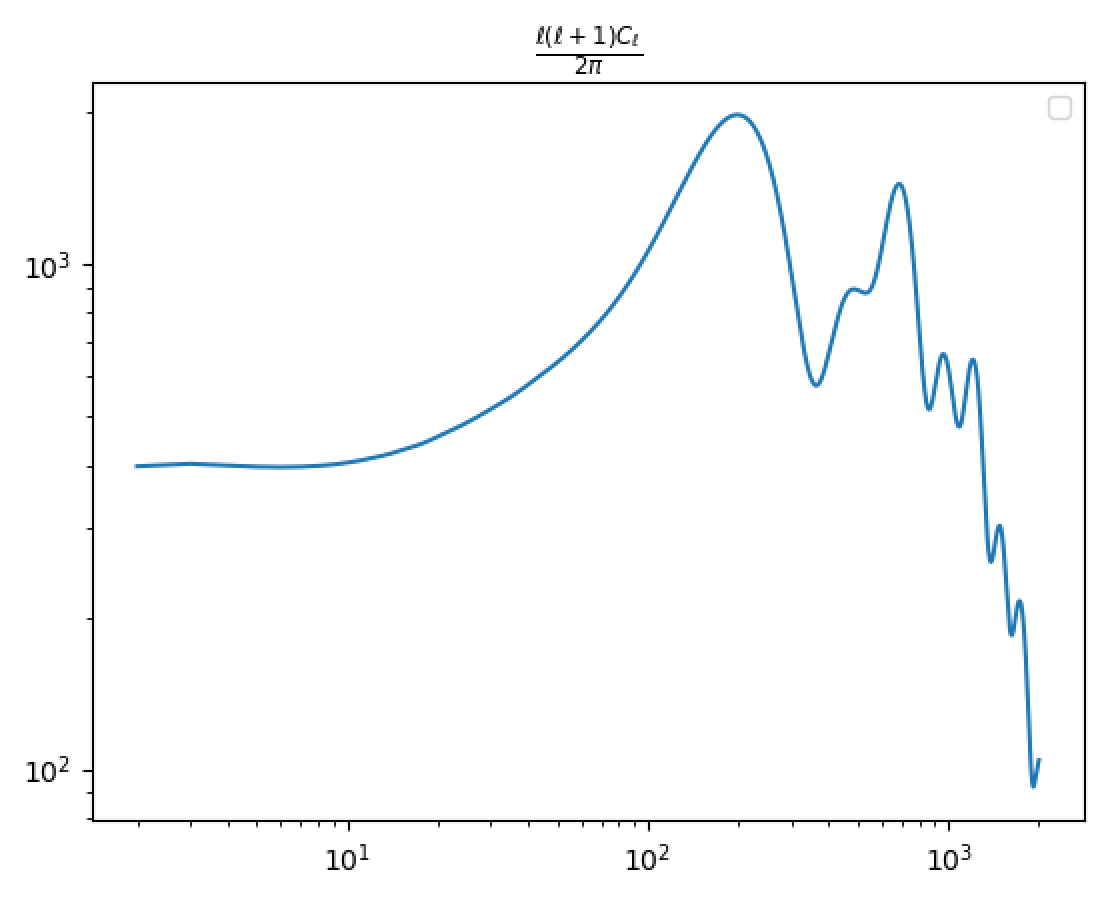 These things are optional, but here are some extra things one can compute.

Generate a CMB map: From the theoretical $C_\ell$ spectrum we can generate a CMB map (as shown at the beginning of this document). Generating a map is a fairly straight forward thing to do, but the hard part of this is to pixelate the sphere and project that down to a 2D map that we can plot. Luckily there is a great library for this namely the HEALPIX library (for this you also need the CFITSIO library). You can supply that library with the $C_\ell$'s or a realization of the $a_{\ell m}$'s (which you can generate from the $C_\ell$'s) and have it provide you the map. The library also has a Python module that is easy to use.

Neutrino power-spectrum: We can't observe this, but you can still compute it. The computation is the same as for photons and polarization just with a different source function that is (ignoring any quadrupole moments) given by $$\tilde{S}_\nu = (\mathcal{N}_0 + \Psi)\delta(\eta) + \frac{d\Psi}{dx} - \frac{d\Phi}{dx}$$ so its just a simple ISW term without the supression of the optical depth since neutrinos have been free streaming since decoupling.