Back to the main page 1. Overview: Milestone I 2. Theoretical background 3. What you have to do 4. Testing your code 5. Appendix

The goal of this whole project is to be able to predict the CMB (and matter) fluctuations - described by the so-called power-spectrum - from first principles and learn about all the different physical processes that goes on to be able to explain the results. 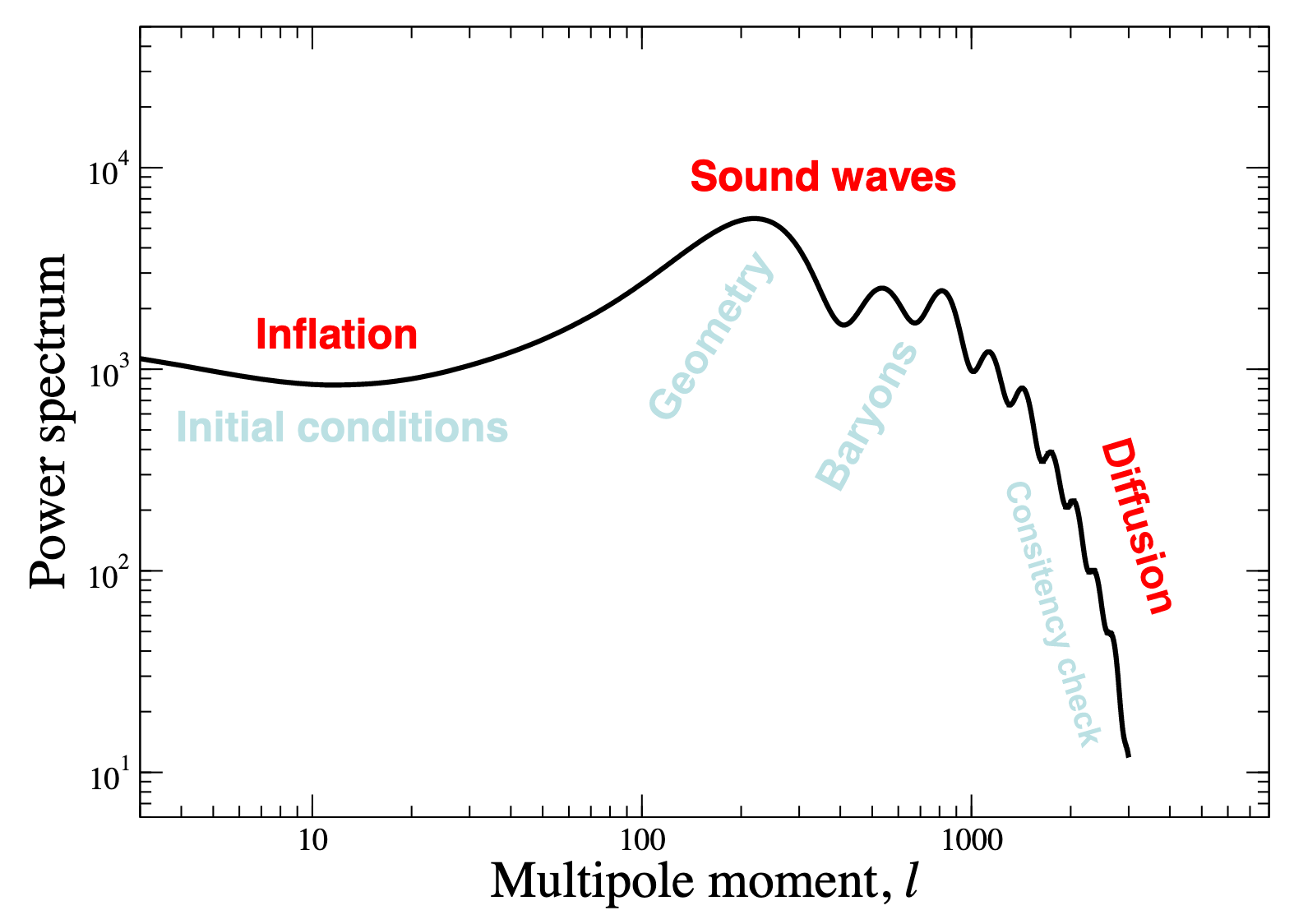 Figure 1: The CMB power-spectrum and the physical effects that leaves its imprints on different scales.

We will do this step by step and the topic of the first project is the evolution of the uniform background in the Universe. The goal here is to make a class/module that takes in the cosmological parameters and has functions for getting the Hubble parameter and the conformal time as function of scale factor and the variable $x = \log(a)$ which will be our main time variable in this course to compute the Hubble parameter as $x$, the logarithm of the scale factor $a$, and the conformal time $\eta$ as a function of $x$.

The deliverables are the following (edited for 2022, for the 2021 version see this PDF):

One note about the $\Omega$'s: often in the litterature people use $\Omega_X$ where they really mean $\Omega_{X0}$. I have tried to be consistent with this, but there might be some omissions. To make it more clear I have also tried to use the convention to always include the argument (i.e. write $\Omega_X(a)$) if I mean the function and not the value today, but always double-check the equations and ask if something is not clear (I mention this as its been a common source of confusion).

If you haven't done so already read Callin (2006). It goes through all the things we are going to do in this course, it has all the equations and it has some notes on possible algorithms to use for the different tasks. It also have many plots that are useful to compare to (just remember that it uses a slightly different cosmology than our fiducial one). Another very good paper (though its written on a much higher level) is this one. A short introduction to the project can be found in this PDF (keynote) which is displayed below.

See the lecture notes for the theory you should know for this milestone.

In this project we don't include curvature, but its good to just implement it in general and put $\Omega_{k 0} = 0$ when running the code (in that way your code will be general). Master students don't have to deal with neutrinos, but do include it in the Hubble equation and just set $N_{\rm eff} = 0$ so that you have it. We also introduce a scaled Hubble parameter, $\mathcal{H}\equiv aH$ ("H prime" or "Hp" for short).

Another crucial concept for CMB computations is that of the horizon. This is simply the distance that light may have travelled since the Big Bang, $t=0$. If the universe was static, this would simply have been $ct$, but since the universe also expands, it will be somewhat larger. Note that the horizon is a strictly increasing quantity with time, and we can therefore use it as a time variable. This is often called conformal time, and is denoted $\eta$.

From the knowledge of the distances we can compute the angular size of the horizon $$\theta = \frac{\eta}{d_A}.$$ This represents the angular size of a patch of the sky which could have been in causal contact at some point. Said differenty: if two objects at the same redshift are separated by an angle greater than $\theta$ then no information could have been transmitted from one to the other (in the tradiational Big Bang picture without inflation).

Once this is done compute $\eta(x)$, spline the result and make a function that returns this function. Also make a function that prints out the cosmological parameters you have taken in and computed. NB: the spline eta_of_x_spline is already defined in the header BackgroundCosmology.h so to create it all you have to do is to call eta_of_x_spline.create(x_array,eta_array,"eta_of_x") with your x_array and eta_array you got from the ODE solver.

When solving for $\eta$ its a good idea to first write the ODE as an ODE in $x$ - our main time-variable throught this course - and solve this.

Then compute the age of the Universe. You can do this in the same way as you did for the conformal time by solving an ODE and making a spline of $t(x)$ (useful for computing the time at any $x$ later on if you need that even though we only ask for the time today here). Evaluating the spline at $x=0$ gives you the time of the Universe in seconds (if you use SI units), but convert it to a more sensible unit like gigayears ($10^9\cdot 365 \cdot 24 \cdot 60\cdot 60$ seconds) when presenting the results.

For the distance measured we ask for you will need to implement the functions you need yourself (not in the template).

For some of the times we ask for you will need to derive analytically the expressions to implement.

If you choose to work with the C++ template take a look at BackgroundCosmology class. The file BackgroundCosmology.h contains the definition of this class, the variables (and splines) and functions it contains. Your task is to fill in all the TODO in BackgroundCosmology.cpp. This means computing derived quantities from the input ($\Omega_{\gamma 0}, \Omega_{\nu 0}$ and $H_0$ from $h$, $T_{\rm CMB 0}$ and $N_{\rm eff}$), solving the $\eta$ ODE and splining the result.

The most important thing about coding is to test your code. There are always bugs and more bugs. The more tests you have the better. Here are some tips (which does not cover everything) about things you can do to ensure that your code is working correctly:

Print out the variables you entered (and the ones you computed) and check that they are set correctly inside the class. A more concrete test is to compute the sum of all the density parameters today. Check that this sum is $1$ (or very close to $1$). This tests fails if you failed to initialize the parameter correctly. Try all the function you have made and check that they work and give reasonable results (for example check that $\mathcal{H}(x) / (e^xH(x))$ gives you $1$).

Show analytically that in the radiation dominated era (when you can ignore energy in matter and dark energy so that $H^2 \propto 1/a^4$) then we have $\eta = \frac{c}{\mathcal{H}}$. Plot $\eta \mathcal{H}/c$ and show that it converges to $1$ the further back in time you go. You can derive similar approximations in the matter and dark energy dominated era (these will be on the form $\eta = \eta(a_i) + f(a)$ where $a_i$ is some scale-factor in the matter era for some function $f$ related to the Hubble factor). Matching these together gives you an approximation you can compare to your numerical results. The result will not match perfectly (unless you set all density parameters apart from radiation to zero), but it will give you an indication if the result is reasonable or way off in the general case. A more direct test is to compute and spline $\eta$ and use the spline-routines to get $\eta'$ and check that $\frac{\eta'\mathcal{H}}{c} = 1$. 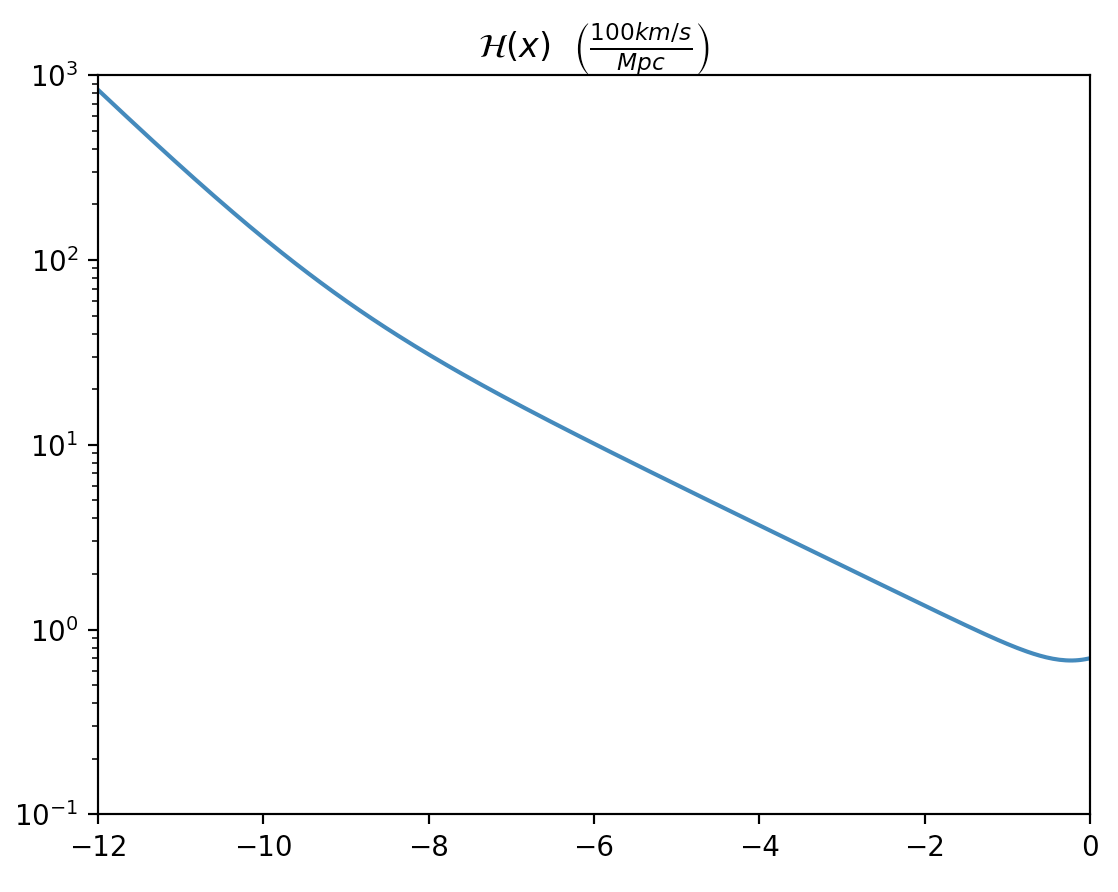 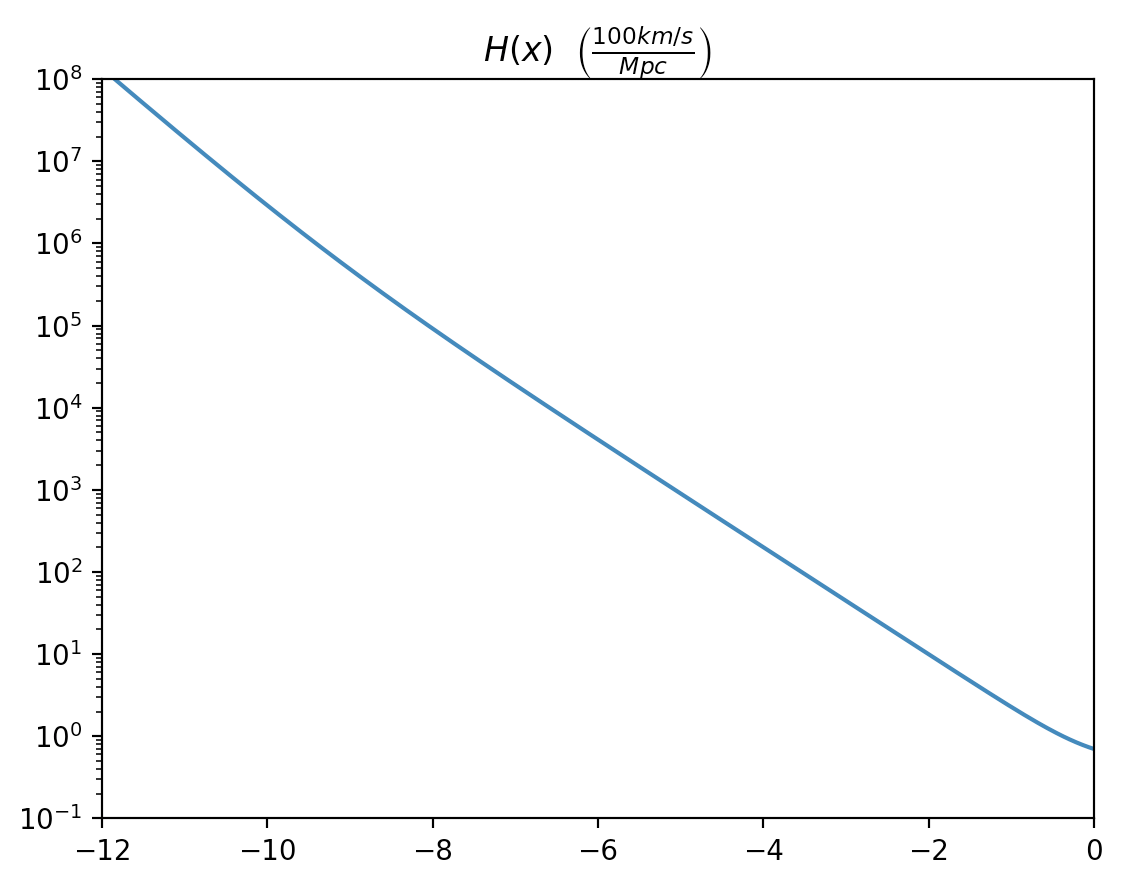 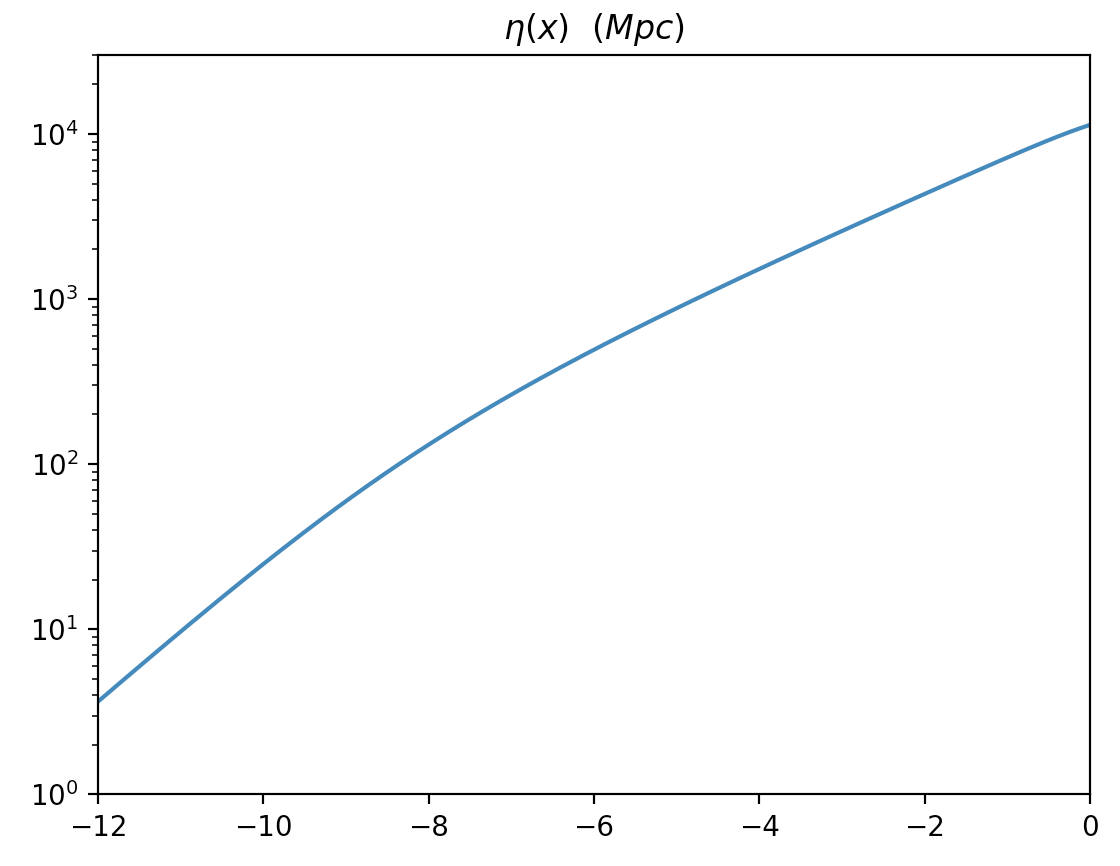 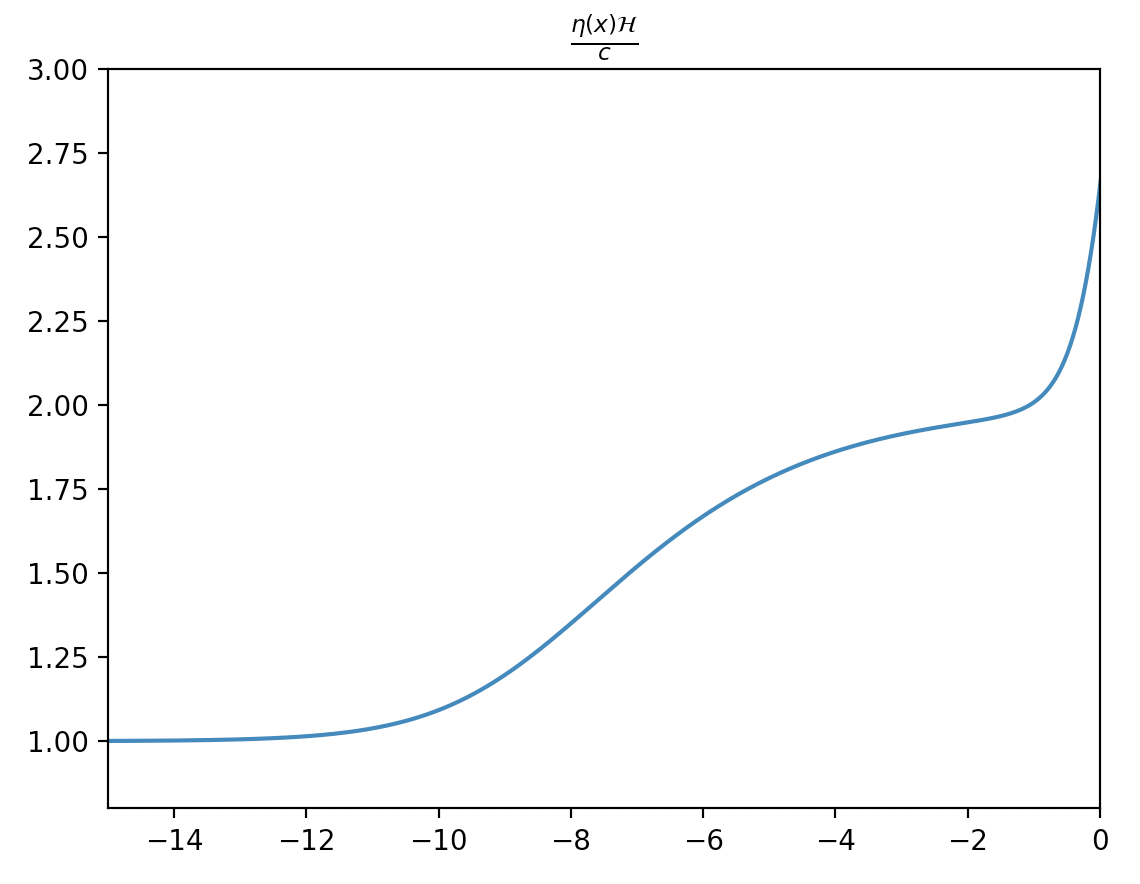 These things are optional, but here are some extra things one can compute.

Note that this lets us constrain the mass of the neutrinos directly from what we know about the background. We know that atmost $\sim 0.3$ of the energy budget of our Universe is mass so it follows directly that $\sum m_i \lt 12$ eV. We can of course do much better that this with a more detailed analysis (the best constraints from cosmology today gives us $\sum m_i \lesssim 0.1-0.2$ eV), but its remarkable that such a simple theoretical calculation like we did above is enough to get a constrain that is of the same order of magnitude as particle physics experiments can currently provide! A common way of including neutrinos in a CMB code is to take $\Omega_{m\nu 0}$ as a free parameter, use this to compute $\sum m_i$ and compute the energy density from the above using $N_\nu$ neutrinos with mass $\sum m_i / N_\nu$. Alternatively take in the three masses directly. Also note that with massive neutrinos the total matter density parameter $\Omega_{M 0} = \Omega_{b 0} + \Omega_{\rm CDM 0} + \Omega_{m\nu 0}$. Why we don't bother to include the mass of the neutrinos will become more clear when we do perturbations - its significantly harder with massive neutrinos as we are forced to sample the full $p$-dependence of the distribution function and then integrate it to just get things like the number density or energy density perturbations.